Self-reflection is a hard task to take on, since the culminating results are often unpleasant. However, regardless of the ugly truth, we cannot improve without first isolating and admitting to the problem. This constructive criticism extends beyond us, our jobs, our families, and our friends – it also encompasses our countries of origin and our cultures. Amongst other complaints, foreigners believe that Americans do not analyze themselves enough.

While traveling through and living in foreign countries, I have had several occasions to compare the good and bad points of my own culture as an American to other cultures. Throughout the years, people from all over the globe have addressed their complaints about Americans to me. I was surprised to learn that many of these opinions were not unreasonable, and actually matched some of my own. 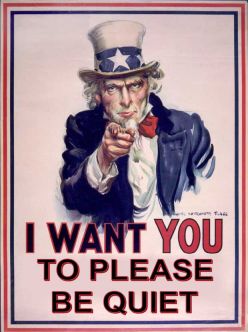 This is not to say that I, or any of the non-Americans that I have met, actually dislike Americans. As a nation, we are not perfect and spending a little less time criticizing other cultures and more time analyzing our own might make life in the U.S. more welcoming for everyone. The following is a list of American traits that foreigners have complained about the most (to me). This information is not meant to be offensive; it should be taken as constructive criticism. Let us show the rest of the world that we are capable of just as much self-criticism as outward criticism.

1) Americans do not know how to relax. Americans are observed as being too rushed all of the time. Meals, coffee time, vacation time, break time, and even sleep. There is always an errand to run, someone to meet, a paper to write, a test to study for, or an appointment to keep. You name it! Americans love a full schedule. This is one American trait I personally cannot shake. Vacation time to me is cuddling up with a Tolstoy novel, whereas vacation time to a European means ignoring the phone, email accounts, diet, and exercise. The American need to stay busy is off-putting to many foreigners, as it is intimidating. The drive behind this “need-to-stay-busy” mentality is fueled by another frowned-upon American trait: that we like money and we need to think of more ways to make it!

2) The oversaturation of advertising can be overwhelming to Americans, but it is shocking to foreigners. An American might argue that this is the way to make money, whereas a European would argue that this is how to go crazy, become bitter, and fall into massive debt.The rest of the world generally agrees that if Americans are good at one thing, it’s manipulating consumers into spending money that they do not have on products that they do not need. When a European does find a quality bargain, there is a period of reflection, deduction, and even research before a decision is made. Americans instinctively buy before thinking because in the end, the time required to reflect is worth more than the money spent. The cultural point driving this difference is that Americans value time more than small amounts of money, and Europeans generally value money more than time. Sometimes it is nice to enjoy what we already have rather than thinking about what more we might need.

3) The culture of customer service and sales in America. This particular point is one of my personal pet peeves: if I need your assistance, I will ask you for it, otherwise please let me shop in peace! Now, to set the record straight, I do not blame the employees. I blame corporate, those people who sit at desks and tell you (because the statistics say so) that customers enjoy being pestered. In Europe, workers generally leave you to yourself after the initial, “Hello” and “I’m here if you have any questions” routine. Honestly, it is a breath of fresh air.

4) Money, money, money! We love money! This is true, the average American is taught to work hard in order to have a better job, a better income, more financial security, and overall a better life full of material goods. Europeans will not deny that having all of this is ideal, but they will argue that material items are not worth sacrificing one’s rest, health, and time with those closest to us. Many Americans work hard their entire lives with little to show for it except debt and regret. Well, the rest of the world has noticed, and they think the greed that exists in American culture has gone too far. Let us try to find a middle ground between humanity and materialism.

5) You must have an exaggerated smile plastered on your face at all times. While in the U.S. I was often confronted at work, in class, or even on the street with these comments, “You should smile more!” or “What’s wrong? You’re not smiling?” Well, news flash: life isn’t so joyous every day for everyone that people would smile all day long for no reason. This is considered very false to Europeans, they see the smile as a cover-up of some kind, and there is immediately a feeling of mistrust. Europeans are often considered rude because they do not smile enough, but as long as they’re not frowning, spitting on you, or otherwise mistreating you, then no harm done. However, if you truly love life that much, go ahead and keep smiling.

6) In America, anything you say can be held against you. In a country that boasts of “freedom of speech,” we are limited to the certain topics, phrases, and words that we are actually allowed to express. I think that it is important to treat people with as much equality and respect as possible, but it is also impossible never to offend someone in such a diverse country. If we truly have the right to express ourselves in the U.S., outside of threats, racial slurs, and unnecessary name-calling, of course, then we should be able to do just that. Instead, we are taught to avoid discussions involving religion, ethnicity, and politics. Americans claim to be “open-minded”; well, if that is the case, then we should possess the patience to listen to someone else’s opposing opinion without being offended.

7) Americans are vulgar in speech. Ouch! Before the pitchforks come out, let us explore the reasons behind the accusation. The vulgar speech stereotype would come from the amount of American entertainment portraying Americans using curse words after every fourth word or so. Speak like this in other parts of the world, regardless of the language you’re speaking, and people will think you are drunk, on drugs, or crazy. The words “like,” “awesome,” and “hella” as fillers also give off an air of stupidity to foreigners. One should have a good enough grasp on his native tongue to express himself without the aid of too many irrelevant emphasis words.

8) Americans are loud! This shouldn’t surprise anyone; the rest of the world has been complaining about our loud voices for a long time. I agree that Americans are too loud. I noticed this while living in the U.S., but I noticed it even more in France. Once accustomed to the low conversations of Europeans, I was shocked when spending time with Americans visiting Paris. Suddenly, everywhere we went people were glaring at us, and I seemed to be the only one to notice why. The Americans just kept going, not realizing that their voices were the only ones to be heard. Not everyone wants to know your business, so make the effort to keep it between yourself and those who are actually a part of the conversation

9) Americans are dumb. I cannot count how many times I’ve heard this comment. What can I say in defense of Americans when there are videos on the web catching Americans in moments of pure ignorance? “The Eiffel Tower is in Australia,” “Pizza is American.” Not to mention the amount of conversations I have had the misfortune of overhearing, myself. I’ll sum up one basic conversation a friend of mine from Paris had during his visit to Los Angeles. When he introduced himself as being from Paris, the general look (on the average female face) was confusion. This confusion is because many Americans are unaware of the large percentage of African immigrants living in France. My friend would then explain that his parents are immigrants from Tunisia, which, he would further have to explain, is located in Northern Africa. Once that point was cleared up, he had to explain that there are Arabs in Africa, because according to those engaged in the conversation only black people live in Africa. That is just one example of course, but I have bowed my head in shameful embarrassment several times. I know there are intelligent Americans out there, so please, I beg you to make more public appearances!

10) America is a car nation; Without one you literally will not go far. In Europe, one has the freedom to move from street to street, town to town, or country to country without ever worrying about a car. More efficient public transportation in cities other than just San Francisco and New York would benefit the country in many ways. Less cars means less traffic, less air pollution, more independence, and more opportunities for those who cannot drive. Not to mention how much more welcoming it would be to tourists who might be too afraid to drive in a foreign country. The other solution is to make American cities more pedestrian friendly. Restaurants, stores, hospitals, and other essential establishments are too far apart from one another. A little less driving and a little more walking wouldn’t hurt any of us.

The pitfalls of American culture should not come as a shock to many Americans. After all, we’ve all heard these complaints before. By recognizing how we annoy other countries, we can make the effort to better ourselves as a nation, even if it is one person at a time. The reality of life is that perfection does not exist, and if we are willing to criticize the imperfections of other cultures, then it is only fair that we accept outside criticism of our own culture.

Jacqueline Perrier-Gillette is currently a resident of Paris, France, where she lives with her husband. Together the two of them operate their small translation company, giving Jacqueline the opportunity to observe the French and their culture up close. She is an avid reader, writer, and student of foreign languages.