Braille is a system used by people who are visually impaired to write and read. The Braille system was invented by Louis Braille, who was blind at early ages but good at learning. In 1825, inspired by a military code used by soldiers to communicate at night without lights, he invented the non linear writing system. In Braille’s system, each letter consists of six dot positions arranged in two columns with three dots each. Different letters are represented by the numbers and positions of raised dots.It should be noted that the first ten letters of the alphabet in Braille system also represent 10 digits, namely, 1 to nine and 0. So how do you differentiate a digit or a letter in  text? Well, there is a special symbol called “Number Follows”, which always precedes a symbol that indicating a digit. These is also another symbol called “Capital Letter” that functions similarly, indicating the following letter is in capital. Below is the alphabet of Braille. 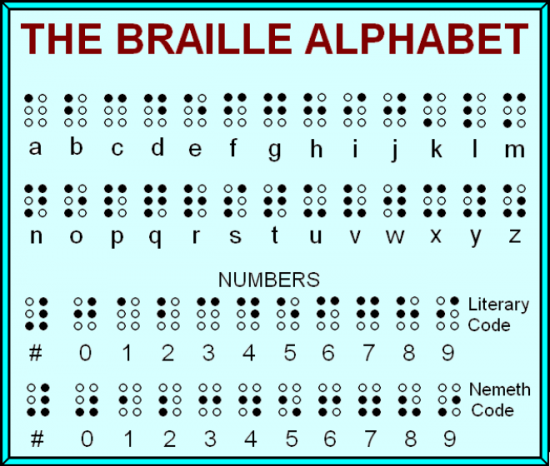 By using the Braille font tool below, you can easily convert or translate your text into braille writing. If you print them out and then put a tiny drop of glue on each “raised” dot, you can make real braille.Notes: Our Braille font below contains 26 English letters and 10 digits as well as a few punctuations.  The “Number Follows” symbol  and the “Capital Letter” symbol we mentioned above can be obtained respectively by typing “#” and  typing “@”. For example, if you want to write number 9, you just type #9; If you want to write A, you need to type @A. If you get errors or suggestions, please contact us.